When it came time to name a future service dog, PRA Group asked its employees to decide through a nation-wide vote.

NORFOLK, Va., May 31, 2022 /PRNewswire/ -- PRA Group, Inc. (Nasdaq: PRAA), a global leader in acquiring and collecting nonperforming loans, is pleased to announce it has partnered with America's VetDogs, a national nonprofit that trains and places service dogs with veterans and first responders with disabilities. The company named a 10-week-old male, yellow Labrador Retriever and future service dog in training in honor of Military Appreciation Month. 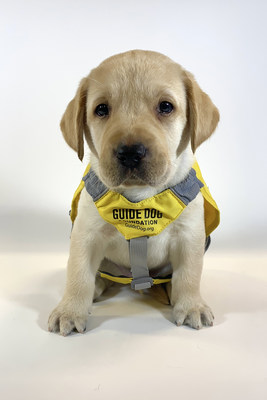 PRA Group began its partnership with America's VetDogs as part of its commitment to supporting military, veterans and first responders. When it came time to name a future service dog, PRA Group asked its employees to decide through a nation-wide vote.

"Employees overwhelmingly voted to name him 'Ace,' which is fitting not only because our business is in financial services, but also because of the nickname's associations with military prowess," said Alexandra Bitonti, manager of events and community engagement and volunteer Puppy Raiser for America's VetDogs.

America's VetDogs provides enhanced mobility and renewed independence to veterans, active-duty service members and first responders with disabilities at no cost to the individual. These specially trained service dogs allow a veteran or first responder to live with pride and self-reliance.

Ace will be raised in Hampton Roads, Virginia, where the company has been headquartered since its founding in 1996. The area's military presence renders this partnership especially close to home for PRA Group.

"With the world's largest naval base close by in Norfolk, this is a critical cause for our local community. I am proud PRA Group will support veterans and service members on a national scale with America's VetDogs. I know first-hand that this organization does a fantastic job of raising awareness, making life-changing connections, and providing long-term solutions," Bitonti added.

About PRA Group
As a global leader in acquiring and collecting nonperforming loans, PRA Group returns capital to banks and other creditors to help expand financial services for consumers. With thousands of employees worldwide, PRA Group companies collaborate with customers to help them resolve their debt. For more information, please visit www.pragroup.com.

About America's VetDogs:
Since 2003, America's VetDogs (www.VetDogs.org) has trained and placed guide and service dogs to provide independence, enhanced mobility, and companionship to veterans with disabilities from all eras. In 2015, VetDogs opened its programs to first responders, including fire, police and emergency medical personnel. America's VetDogs is a 501(c)(3) not-for-profit organization founded by the Guide Dog Foundation and serves clients from across the United States. VetDogs relies on contributions from generous individuals, corporations, service clubs and foundations to fund its mission to help those who have served our country live with dignity and independence. It costs over $50,000 to breed, raise, train and place one assistance dog, but America's VetDogs provides its services completely free of charge to the individual. America's VetDogs has been accredited by both the International Guide Dog Federation and Assistance Dogs International.